Started in Soho in 2010, WeWork capitalized on the growing wave of new entrepreneurs practicing their trade outside the walls of the traditional office building. Fast-forward nine years and the mold of conventional commerce has cracked wide open.

Today, with WeWork a national phenomenon, there’s a bevy of new coworking spaces offering amenities, cultures and other perks WeWork can’t. We’ll dive into a handful of those alternative coworking spaces and how they’ve evolved from the original WeWork model.

In New York City alone, there are a few subgroups redefining the shared office work style. Focusing on tech, specific community-building, personal wellness, and luxury design set these spaces apart. While many spaces offer a little of each, we have found eight that go all-in on their end of the bargain. Let’s take a look at some of the NYC coworking spaces giving WeWork a run for their money. 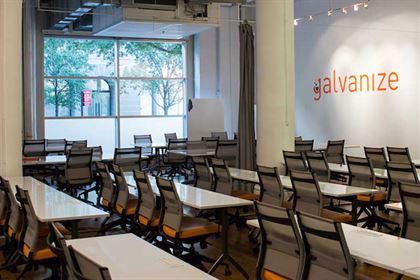 Galvanize works almost like a college for tech start-ups and professionals. They opened their 55,000 square foot Soho office in 2016. Dedicating much of the space to hackathons, coding boot camps and meet-ups, you can get the classic coworking treatment too. They’ve got conference rooms, private phone booths, bike lockers, and locally sourced coffee. For those working in the tech sector, Galvanized gives the added bonus of possibly getting hired by the guy ahead of you in the coffee line.

This California-based coworking group grew into a national venture, touting a special data network and internet connectivity as their draw. With locations in five states, TechSpace‘s highly coveted secure network gives them an edge over less-data conscious (read “pleb”) internet you’ll find at other offices let alone the local cafe.

Photo by The Wing

Launched in 2016, The Wing envisioned “a golden age for women” founder Audrey Gelman told The Washington Post. That was when everyone assumed Hilary Clinton would be the 45th President of the United States. Still, The Wing offers an oasis for women floundering to find their needs catered to in traditional offices and coworking spaces alike. Lactation rooms, locations in NYC (Manhattan and Brooklyn), DC and SF, events with power-house speakers like Representative Alexandria Ocasio-Corteza and a list of high-profile early members boost the appeal of a girl’s society that certain professional women desire.

Calling itself a platform, Alley offers various forms of coworking space in its five locations. Its variety of desk offerings, with names such as Weekend Warrior, Side Hustler or Day Pass, expand the typical pay structure of most coworking spaces. There is also a focus on women’s programming but without the application-only barrier-to-entry found in spaces like The Wing.

Expanding the flexibility and ingenuity WeWork used as a springboard for coworking spaces, Primary integrates fitness and personal wellness classes into their amenities. Members get access to a gym, pilates studio, shower room access plus courses on fitness, meditation, and small business growth. Their mantra: “We believe that if you make your primary focus yourself and your wellness, all else in your life–including your business–can thrive,” co-owner Lisa Skye Hain told Uncubed in 2016.

Mostly geared toward vinyasa yoga, New Love City‘s Brooklyn location also provides a minimalist open space for coworking. Available by application, it includes free yoga for the duration of your contract. Great for yogis with a day job who prefer a more intimate coworking crowd. 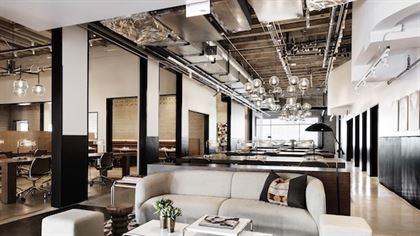 For creatives, it can be hard trying to focus on invoices when the environment is not up to your standards. That’s where NeueHouse stepped in eight years ago. The luxury coworking space offers private offices, conference rooms and shared gallery space befitting of any design professional. Of course, culture is king so the Hollywood and Madison Square locations tout evening programming and host private events too. 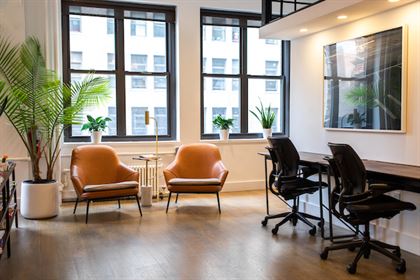 Blender Workspace offers a luxury coworking space with the design-forward approach and shared and private office options of NeueHouse as well as the added bonus of wellness, entrepreneurial and lifestyle programming events in the evenings.“The idea of incorporating artwork, music, wellness and other cultural experiences as an equal to the workspace was something that played a big role during the inception of Blender,” – Jeremy Levitt, Principal of design firm Parts And Labor. Luxury, after all, is about comfort. What is more comfortable than a beautifully designed workspace that helps you effortlessly balances the scales between work and life.

Seems WeWork has some competition.
Check out some of our other posts on coworking spaces here.