NYC has undergone a radical transformation the last few months in order to accommodate the needs of bars and restaurants. The latest destination, NeueHouse Madison Park looked to some of its own members, associates at Australian architectural and design firm BVN, for the modular system, Re-Ply, that now composes their new addition, The Longhouse. 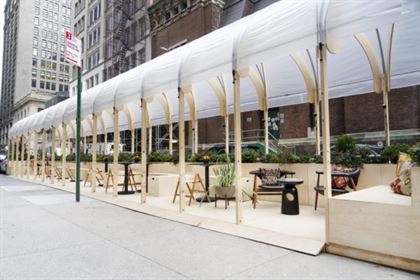 BVN’s previous work has stretched from towers to architectural workplace interiors. Re-Ply is at a much smaller scale than what they’re used to doing, but just as necessary. They decided to attempt to do something with all of the plywood that would ultimately get removed and thrown away. Wood that had been all over city windows and doors just months beforehand. “We asked people to donate their used plywood when they were taking it down and we collected it all with a U-Haul,” Flutter continues. Rockefeller Center donated more than 200 sheets of plywood alone. BVN has since placed modular tables constructed from their own recycled barricades. 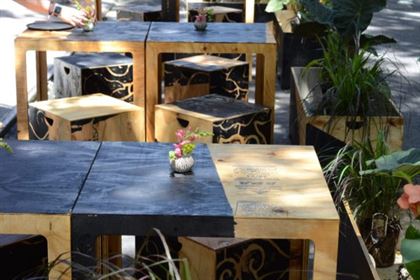 Their first project began at their friend’s restaurant,  Wayan. “We built all that furniture ourselves, out in the streets of the West Village, in front of Nikita’s apartment,” Flutter says. Wayan was such a success that they become great advocates for BVN and Re-Ply. And in the midst of it all, regulations changed and BVN realized the usefulness of their redesign idea year round.

With NeueHouse, Notowidigdo and Flutter brought tweaked their modular concept with the creative destination’s internal design team. “It’s really designed around a standard platform module—where we have a corner at the end, which is a bench seat, and then these movable seats you can plug in and out if you want them.” The Longhouse design is accented with custom upholstery and fabrics from Kvadrat. NeueHouse member Lily Kwong Studio contributed gorgeous landscaping, as well.Wyatt adds, “The structure of The Longhouse itself was intentionally designed to accommodate multiple forms of gathering by the use of modular furniture and flexible layouts. The outdoor experience alone breaks down the walls of an enclosed space, exposing our community and live activations for public view. Ultimately democratizing creative ideas, collaboration and sharing among a wider community.” 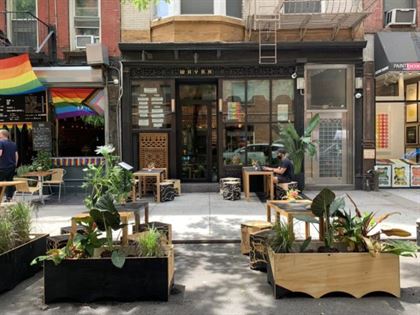 “We felt the current times called for a shake-up of how traditional spaces function combined with signaling to our member community and NYC neighborhood what NeueHouse stands for— bringing people together under a warm, inclusive space. Creating emotionally welcoming spaces is now, more than ever, essential,” Josh Wyatt, CEO of NeueHouse, tells us.

Only Looking to Cover Their Costs 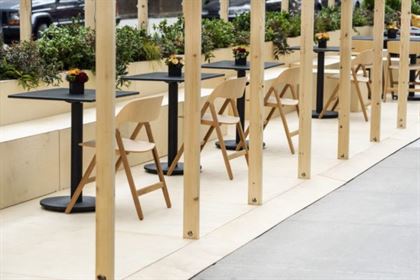 At present, The Longhouse is open through the end of December—though it could be extended into the new year. And BVN is already finding more applications for Re-Ply in the city.  Both Notowidigdo and Flutter are quick to mention that none of it would be possible without millwork from Bestmark National and fabrication at Bed-Stuy-based Deep Cuts Fabrication. They’re also only looking to cover their costs. “Our overall goal is to give some portion of our profits to a charity we selected,” Flutter says. It’s called Children of Promise and its mission is to look after the children of incarcerated individuals—and as with their fabricators, the charity is based in Bed-Stuy, too.